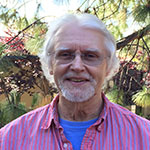 Bill became the Central Services board member in January 2020 after serving as vice president from 2015 through 2019 and as chief steward from 2009 through 2015. He also served for several years under SEIU, first as the De Anza Chief Steward and then as the Central Services Chief Steward. In addition to his union duties, Bill also served several years with the De Anza Classified Senate. Since joining the District in 2001, Bill has worked as a programmer analyst in Educational Technology Services (ETS).